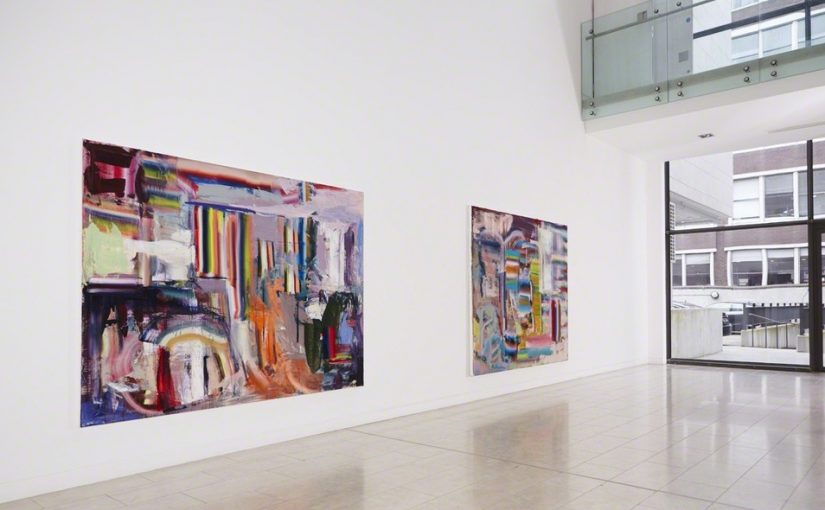 Thomas Jaeckel Gallery is pleased to present Diana Copperwhite’s “Depend on the Morning Sun”. The exhibition features new large oils on canvas. This is the artist’s third solo exhibition at the gallery. The exhibition effectively extends the continuum of abstractions in color that have engaged the artist in recent years. Fusing schematic shapes and fragments, her apparent abstractions recall a flash of connections through time, or maybe a glimpse of switching of identities, or the way an interior, or an external, space may be seen via moving digitized images. We are drawn by the vivid light and color of her paintings and are left with a test in our bringing an identification of her imagery.

The exhibition will be accompanied by a monograph with an essay by Gail Levin.“Diana Copperwhite makes big bold oil paintings that excite and stir our twenty-first-century perceptions. Her compelling images are both complex and energetic. She is never at a loss for the impulse to paint, though she is coy about revealing her concerns, often throwing the viewer just a few clues and leaving a lot of room for the imagination. She creates an exquisite tension between abstraction and figuration or representation of any kind. She appears to tease out this tension to hold our interest, as we both take in the visual splendor of her paintings and try to fathom what they are about.”   Excerpts from Essay. Gail Levin PhD, Professor of Art History, American Studies, and Women Studies at Baruch College and the Graduate Center of CUNY.Diana Copperwhite, born 1969, lives and works in Dublin. Copperwhite has exhibited widely in Ireland and abroad. Recent solo exhibitions include Driven by Distraction, Royal Hibernian Academy, Dublin, 2016, A Million and One Things Under the Sun, Kevin Kavanagh, Dublin, 2015, Shadowland, Thomas Jaeckel, New York, 2014, solo presentations at PULSE NY, 2015 where she was nominated for the PULSE prize and at Volta NY, 2013. Copperwhite was awarded the AIB Art Prize in 2007 and her work is held in many important public collections, including the Office of Public Works, the Irish Museum of Modern Art, the Arts Council of Ireland, Limerick City Gallery of Art, Dublin Institute of Technology as well as private collections in Ireland, across Europe and in the United States.

“Her work is about painting first and foremost; [these] references merely serve a purpose.  Thus digital images which freeze and fragment an original image fascinate her, but such images in themselves are not enough, they provide a way into the painting.  It is their visuality which inspires rather than any precise sense of a blurred or fragmented reality.   Because she physically likes making paintings, everything is subservient to what paint will achieve.”

Copperwhite makes paintings that move fluidly between representation and abstraction. Photographs, montage and assemblage all aid the process and become ancillary works that pin down fleeting thoughts, glimpses and reactions to a media saturated age.  Her interests and sources are eclectic and wide ranging, from social media to philosophical debate to art historical references.  Yet, as Toibin points out, her paintings are no more about the image than they are about the process of painting itself.  Her work is phenomenological in that momentarily emotional responses override the need to capture reality.  Something has piqued her interest and from that initial interest she thinks in colour, in tone, and texture, in setting herself a visual problem to which there is no single definitive solution.  Her palette is composed of murky undertones punctuated by bright neon rifts. The fluidity and expressiveness of the painting gives little hint of the rigorous and formal abstract principles applied to the making.

The writer Colm Toibin is currently Irene and Sidney B Silverman Professor of Humanities at Columbia University.  He is an IMPAC Dublin Literary Award prizewinner, and has appeared on the Booker shortlist, most recently in 2013 for his play the Testament of Mary.